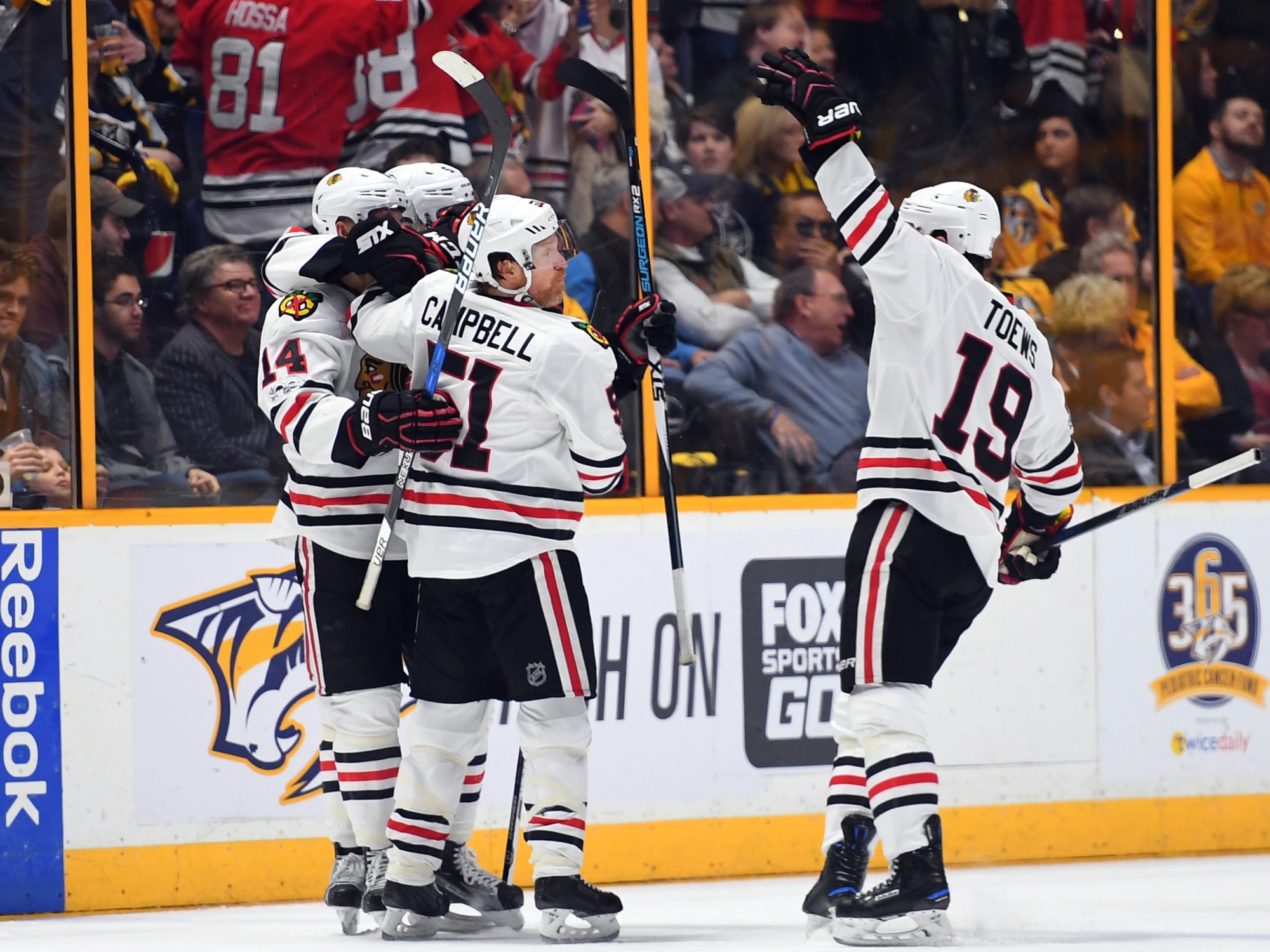 It’s already March and the Blackhawks are entering the final stretch of the 2016-2017 season before the playoffs. After their 5-3 victory against the Predators on Saturday night, the Blackhawks have 89 points with a month left in the season. The Minnesota Wild sit first with 90 points (as of 3/6) and both teams have played extraordinary hockey the past few weeks.

The Blackhawks are 12-1-0 since February 1st with their core duo superstars Jonathan Toews and Patrick Kane dominating like we are used to seeing. Toews has 26 points in his last 17 games and Kane has 12 points in his last seven games including two hat tricks. GM Stan Bowman also worked his magic at the deadline by bringing back veteran D man Johnny Oduya from the Stars as he gets ready for what hopes to be another deep playoff run.

Despite some nagging injuries to Artem Anisimov, Niklas Hjalmarsson and Scott Darling recently, things are still looking up. While Darling will be out a few weeks, Hammer and Arty are said to be back within this week and Nick Schmaltz (who was battling illness over the weekend) is also said to return.

With so many young guys on this team trying to mesh with the veteran core, there was some early-season skepticism from fans about the Blackhawks chances at a cup this year. Though it’s hard not to be confident in a franchise that has won three cups since 2010 and has appeared in five conference final series since 2009, the Blackhawks were getting points early, but not exactly dominating. The outstanding play of Corey Crawford and Scott Darling in goal got the Blackhawks some points in many games they did not exactly play great in getting out-shot and out-played.

But the turn of the new year and furthering of development of young kids like Hartman, Schmaltz, Hinostroza, Kero and others, the team seems to have found their chemistry. Having that depth play well has been a big part of the Blackhawks sustaining success the past two months despite some injures here and there.

‘‘Hopefully things don’t slow down at all, but I think that our team is very versatile. And if doesn’t work, then you try something else. That’s why you commend [Schmaltz] for doing what he did [Wednesday] night.” -Coach Queneville to Sun Times reporter Brian Hedger

Whether the Blackhawks are the 1st seed or the 2nd (most likely one of those two) the team knows what lies ahead of them in April and hopefully May and June. It’s clear that regular season standings mean nothing to the Blackhawks considering their last Stanley Cup win was a year they finished third in the division. The most important thing is make sure everyone is healthy and ready to go when the playoffs start, because a fully healthy Blackhawks squad has as good of a chance to win the cup as any team.

The biggest roadblock to the Stanley Cup finals in the West are those Minnesota Wild. A team that has been playing consistent hockey and have added some vet pieces like Eric Staal and Martin Hanzal to play alongside Parise, Koivu, Zucker, Dubnyk and others. A very skilled and tough team but you can never count the Blackhawks out against them. The defending conference champion San Jose Sharks probably pose the other big threat in the West with last year’s core mainly intact.

Take away those two teams the way the Blackhawks are playing right now, it’s hard to see any team in the west beating them in a seven-game series. The Ducks are still good but not like they were a few years ago and the Blues have lost a lot of that core that contended the past four seasons or so. Teams like the Kings, shells of their former selves and Flames are battling St. Louis for wild card spots and the rejuvenated Oilers are very young and inexperienced.

I say this boldly, if the Wild lose in the first round and the Blackhawks advance, the Hawks may have the easiest path to the finals since this core came together.