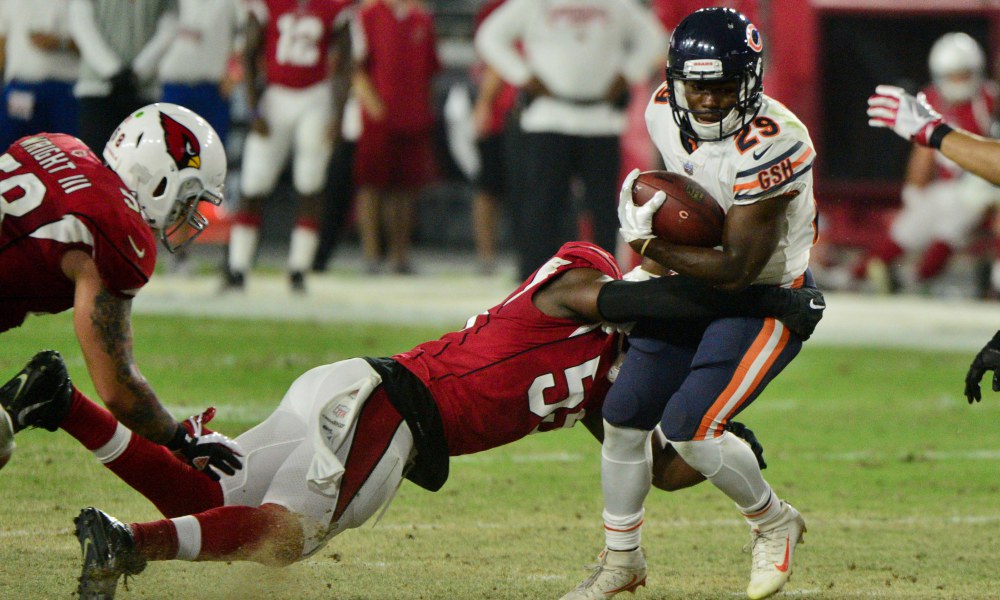 In this article, Thomas Gibbons and Johnny Hatelak share their likes and dislikes from the Bears second preseason game in Arizona.

Mike Glennon: Although his stat line doesn’t look that bad especially in comparison to the last game, it comes off as empty calories when you put it to the eye test. The first thing you notice is the short easy passes he threw that he completed. This was a game plan that looked more designed for a rookie than a 5 year NFL veteran. That wouldn’t be so bad if when he got his shots he’d be a lot better at some of his attempts.

At this point, I’d settle for better incompletions downfield. It’s pretty evident that he is not very accurate downfield. The second thing I noticed is early on all he did was look for Cameron Meredith. I know they did well in camp together thus far and he’s his security blanket, but you’ve got to look elsewhere especially when your security blanket is covered like one. The third thing I observed is if you want to rattle him just bring the heat. He is not very good when being pressured at all. He has very little poise in the pocket and his feet are clunky. It’s evident you’ll be limited in your game plan because of those clunky feet of his. The fourth thing is he makes bad decisions. On his near pick six when the Bears were inside the Arizona Cardinals ten-yard line not only was extremely late and behind intended target Kendall Wright, but there were several Cardinal players in the vicinity including one of their most dangerous Tyrann Mathieu who got the pick. While it was an improvement the play of Glennon is concerning, to say the least.

The third thing I observed is if you want to rattle him just bring the heat. He is not very good when being pressured at all. He has very little poise in the pocket and his feet are clunky. It’s evident you’ll be limited in your game plan because of those clunky feet of his. The fourth thing is he makes bad decisions. On his near pick six when the Bears were inside the Arizona Cardinals ten-yard line not only was extremely late and behind intended target Kendall Wright, but there were several Cardinal players in the vicinity including one of their most dangerous Tyrann Mathieu who got the pick. While it was an improvement the play of Glennon is concerning, to say the least.

The fourth thing is he makes bad decisions. On his near pick six when the Bears were inside the Arizona Cardinals ten-yard line not only was extremely late and behind intended target Kendall Wright, but there were several Cardinal players in the vicinity including one of their most dangerous Tyrann Mathieu who got the pick. While it was an improvement the play of Glennon is concerning, to say the least.

Second half offensive line: It was evident that the blitzing by the Cardinals was handled much more poorly than the first half. This was in large part due to the fact the bears had their backups and their backup backups in there, so it is to be expected. However, they played even more poorly than one would expect from NFL players backups as they were not only missing assignments but losing their one on one battles as well.

There were two sacks that were actually negated by penalties and Trubisky was hit hard on two occasions. One was a very scary low hit that made all of Bears nation gasp in horror. It was not until Loggains began moving the pocket and Trubisky’s launch point that he then was free of angry defenders breathing down his neck and found success down the field. Not only was pass protection poor, but the running game seemed to stop. Of course, there was a heavy dose of Josh Rounds who won’t be with the team come cut time, and Tarik Cohen who had an excellent game had his ass firmly implanted on the bench. There were a ton of no gains and tackles for losses. Far too many for my liking and I’m sure the Bears liking as well.

Special Teams: Special teams Saturday night was indeed that, special! Other than a missed Field Goal by recent Bears pick up kicker Roberto Aguayo, they were pretty flawless. That field goal looked like a Greg Maddux cutter by the way.

There also was a nice kickoff return for the Cardinals late in the second half, but other than that the Bears coverage teams were excellent once again. There was the Deonte Thompson’s 109 yard return which was more 110 yards as he caught it right at the back of the end-zone that was a huge momentum swing that had the Bears take a 17-7 lead into the half as opposed to being tied at 10 or just a 3 point lead as the 63 yard attempt was a tough one and only happened because the referees decided to add a second on the clock after it appeared the clock had run out.

By the way, it looks like the Bears won’t be cutting Deonte Thompson any time soon either. Pat O’Donnell was excellent with booming punts with great hang time once again, and both Place Kickers made all their one point conversions and Connor Barth made his one Field goal attempt. Aguayo also boomed all his kickoffs for touchbacks, and the Bears return team had a good game as well. Looks like special teams will give the Bears good field position this season.

Johnathan Bullard: The Bears third round pick a year ago out of Florida has shown you why he was drafted by the Bears. Seems like he has adjusted from being a 4-3 end in college to a rough and tumble five technique 3-4 defensive end in the NFL. He was strong at the point of attack and stout against the run and put on consistent pressure and made consistent penetration in the backfield all night long.

So far it’s looking like he will be your starting defensive end opposite Aikem Hicks once the bullets start flying for real. He had countless pressures and a couple tackles for loss and was a load to handle no matter who tried to block him for the Cardinals. This is good news for the Bears as it will go a long way to freeing up their other playmakers with a stout defensive line which looks like a formidable one with the way Bullard has looked.

Eddie Goldman (if he can just stay healthy), Hicks and Bullard looks like one of the better 3-4 lines in the league and can possibly be the best 3-4 Defensive Line in the NFL at seasons end. I would not be surprised if all three made it to the Pro Bowl. Hicks should have been there last season.

In summarizing last night’s game, it looks like the Bears will be able to rely on their running game, defense, and special teams as consistent units for them all season long. If only they can figure out the passing game I think the Bears have a chance to make a lot of so called experts look like fools with a very surprising and successful season.

Cre’von Leblanc played like the starting nickel cornerback. With Bryce Callahan out with injury, LeBlanc got a lot more playing time. As the Bears are revamping their secondary, it’s important for them to build from the ground up, and LeBlanc is definitely a building block.

Cre'Von LeBlanc with textbook coverage. Doesn't give much room, closes fast and arrives right as the ball does. #Bears pic.twitter.com/4Bvn1BhlR6

LeBlanc had three tackles and one pass defended (video above). Personally, I like LeBlanc covering the slot. He had to play outside last season due to the situation. But his size, 5′ 11″ 175lb, matches up better with speedy slot receivers rather than taller much more physical receivers lined up wide.

Unless Callahan can get healthy and have an impressive game three, LeBlanc is your starting nickel cornerback. And you should not have a problem with that. It took some time last season, but he came around and was a bright spot of last season. An undrafted free agent turned into a solid starter. But now with the additions of Prince Amukamara and Marcus Cooper, his role will change. But I think the nickel cornerback is a way better position for him to produce in the NFL. LeBlanc is no doubt a guy to keep an eye on for the rest of the preseason.

Tarik Cohen’s speed was on full display last night. Stepping in for Jordan Howard with the starters, Cohen showed his speed, especially on toss, and his playmaking ability. He rushed for 77 yards on 11 carries, one being a 25 yard run.

Do not let his small stature fool you. Along with Cohen’s speed comes great balance and awareness. His ability to get up the field so fast is remarkable. Last night’s performance from Cohen was a strong case to be the primary backup to Howard.

The Bears selection of Cohen raised some eyebrows. A 5′ 6″ running back from North Carolina A&T? What is Pace doing? Well, Cohen burst onto the scene pretty quick. His speed and versatility has been present from camp since day one. He’s the perfect third down back, especially on routes out of the backfield. If you put him in space with a linebacker, forget it.

Kevin White is still far behind from becoming a reliable receiver for whoever is at quarterback for the Bears. His development took a major blow since he’s only played in four regular season games in two seasons. But even now with a full camp under his belt, he still has a lot of work to do.

White only had two receptions for two yards last night on three targets. His speed off the line is there but his breaks still need improvement. Can you put any blame on Glennon? Maybe. Glennon played a little better in game two, mostly throwing check downs and short throws. We have yet to seen him take shots down the field.

Back to White, he needs to master simple routes ( slant, curl etc…) if he wants to be effective. Along with the deep ball, White has to be able to excel in short to intermediate routes to move onto more complex routes.

Game three of the preseason is when the one’s play at least the first half. White has to show up and let the staff know he’s making progress. White should have a better matchup in Tennessee on Saturday. Now is his chance to secure his spot with the starters.

The Bears handling of the quarterback position is something I do not support. Mark Sanchez should not be taking series away from Mitch Trubisky. The Bears know what Sanchez is. Heck the whole league knows what he is, a journeyman quarterback who will never win a starting job again.

Trubisky needs all the snaps he can get. Glennon has been named the starter so, barring injury, Trubisky will not see the field for months. These four games are crucial for his development and evaluation for the coaching staff and himself.  You need to see what he can do and can’t so you know what to improve on in practice.

I fully expect the Bears to move Trubisky to second string QB this week. He should see time with the two’s vs. Tennessee and no doubt vs. Cleveland.  If they do not move Trubisky up with the second team, all hell may break loose.

The Bears are back at practice on Monday and travel out to Tennessee for a noon game on Saturday.