The Bears desperately needed this win against the Steelers there is no denying that. To lose this game after being competitive in all three games may have set the season spiraling down the drain. Not sure if the team could have taken another loss where their field general was the very reason they lost for the third straight game. Yes, I did include the Tampa Bay game because they were competitive minus their Quarterback. You may want to include the penalty epidemic the last two games as well. This team needs to limit the self-inflicted wounds if they intend to run the football offensive equivalent of the Princeton four-corner offense.

This game was a rather bizarre one. It all started with the news of the anthem protest and ended with the Bears shoving the ball down the Steelers throat and making them like in overtime for the win. However, the Chicago Bears organization will look at this as a finely fermented wine even though it may be a poorly crafted skunky beer. Well, it wasn’t that bad, but a smooth operation it surely was not.

Again, the Quarterback stands out in a very negative way. Mike Glennon was given a kiddie game plan and executed it very poorly. I’ll get into that more in the Quarterback grades section and the all-22. However every wear else the grades will be high. Well, one play will screw up the special teams grade for the second straight game.  Connor Barth’s missed field goal won’t help either. Think we all know how these grades will go. So on with it.

This is becoming a broken record. This Quarterback does not give you a better chance to win than your number two overall pick Mitch Trubisky does. However, there is no way they start the kid on a short week on the road on national television against the Bears bitter division rival. So we will likely have to wait one more week unless something happens in the packer game that requires the Bears to go to Trubisky.  In this game, Glennon was just as bad maybe even worse than the prior week against Tampa Bay.  His big-time mistakes in Tampa doomed them before they had a chance and maybe the only thing from it happening again is the ultra-conservative game plan they scripted for Glennon and even in that circumstance, he had a terrible pick a close one and a couple of botched snaps. He had zero to do with the victory and made the victory harder to get than necessary.

Here the Bears are backed up deep in their own territory. Bears begin in 11 personnel two wides right one left Howard on Glennon’s left hip. Pittsburgh counters in nickel in a 4-2-5 alignment with heavy traffic to the right of the formation and in a two-deep coverage on the very back end.

Tight End Zack Miller motions to the left to the center and then back to his original position to see if they can tip the Steelers hand, but the Steelers stay put exposing nothing pre-snap. 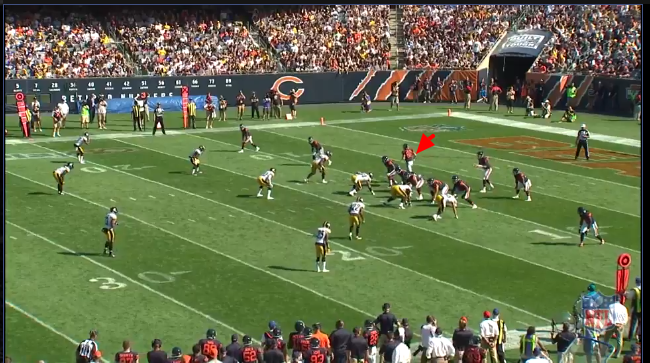 The proper read was Wheaton running the button hook as he had 4 yards of separation and no one else around him but for the man who was on him. Would’ve been an easy connection. Pre-snap as well as a fraction before the throw you can see three Steeler defenders converge on Miller who were all in the area pre-snap. The right anticipation throw and that was a first down and maybe more if Wheaton gets it in his hands on time. 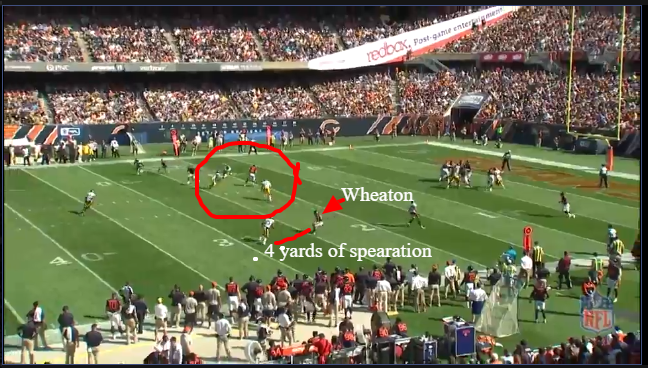 Instead, a stupid pick at the worst possible time late with a lead from inside their 10-yard line. Not only a bad decision but an awful throw behind Miller nowhere ear him and in the waiting arms of a Steeler defender. A short field is given to the Steelers offense with only seconds taken off the game clock.

What more can be said here?  Jordan Howard ran heroically when the team really needed him. Could not imagine this one being won without him. He was a battering ram and really wore that Steeler defense down and punished them in spite of playing with a bum shoulder. Tarik Cohen was fast, and exclusive as ever and was perhaps millimeters away from breaking off a long run for the game-winning overtime touchdown after having the touchdown reversed on a controversial overturn that said his heal touch the sideline before he galloped all the way to paydirt.

People will point to the teams one reception by Deonte Thompson as being evidence of the Wide Receivers being inept and unable to shake off their defenders and thus deserving of a failed grade. I personally will not give them a bad grade until I see them operate with a good if not competent Quarterback at the helm. I was even tempted to give this group an A after seeing them physically dominate the Steelers secondary as run blockers. It was a total throwback moment that the Bears receivers won on pure man-a-mono physicality. Brought tears of joy to my eyes.

Another group that physically dominated the edge defenders and linebackers in the run game blocking aspect of it. They also contributed in the passing game with Adam Shaheen getting a wide-open touchdown pass from Glennon on an excellent all by Bears Offensive Coordinator Dowell Loggains. They exploited the laser focus of the Steelers defense fixated on stopping the run there and got an easy one.

Very tempted to give this group an A. It wasn’t quite A material however as I saw a few mistakes with penalties and some losses one on one allowing pressures that may not have factored with a Quarterback with a quicker processor and better athletic ability, but did factor here. However, total nitpicking for a group that dominated a very good Steeler front 7 that bring some very exotic blitzes and were very good at stopping the run until this game.

Another dominant performance by the other side of the line of scrimmage the defensive line. Stopped the run cold and were in the backfield buzzing around Roethlisberger all game long affecting his comfort level and giving the secondary the complimentary help needed to shut down that vaunted Wide Receiver corp. Also tempted to give them an A here, but did not see an A performance. Needed a little more production as far as pressures hits and sacks go. Keep in mind that many think the Steelers have the best offensive line in football and the Bears whippd them soundly. Pernell McPhee and Willie Young each had sacks and set the edge in the run game. Leonard Floyd whiffed on a sure sack too that actually turned into a positive play for the Steelers as well. Young has been the Bears best front 7 performer thus far in a close call with Akiem Hicks as a close second.

Another group that played soundly in spite of losing their leader Jerrell Freeman and his backup Nick Kwiatkoski. can’t express enough how impressive the Bears have been in spite of losing many of their big guns to injury. Shows improved depth and the benefit of these young second and third-year players getting all that playing time last season from all the injuries they had in 2016.

Again they shut down a high-flying dangerous receiving corp. That’s three straight weeks of facing arguably the best-receiving corp in all of football and three weeks in a row containing if not shutting them down. They also played a physical brand of football in run support. I give them an A in spite of no picks. Think I credit Roethlisberger’s decision making for that more than the secondaries failures. 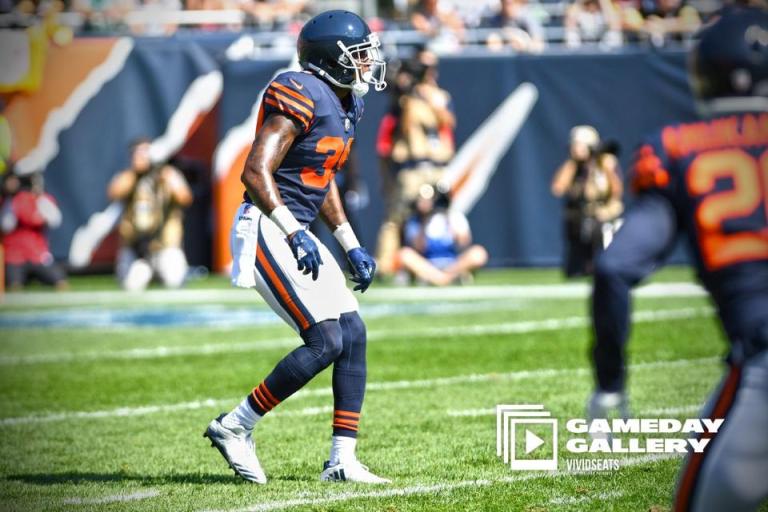 Again just like the corners this group contributed to both shutting down their weapons and supporting the run. This in spite of losing one of their captains and quarterback of the secondary Quintin Demps to a broken forearm. 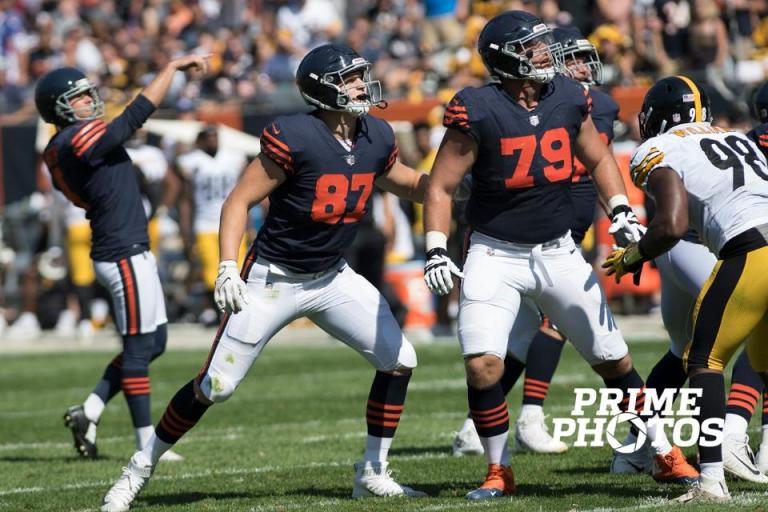 A missed field goal and perhaps the dumbest mistake in Bears history by Marcus Cooper losing the Bears 6 and possibly 7 sure points to end the half give them a C-. Also, no big plays in the return or coverage units.

A- is the grade and that minus is because of sticking with Glennon. Other than that they had this team prepared and got the win in spite of everyone picking the Steelers.

Due to the late release of the all-22 by NFL.com’s game pass and my having to go to work seven straight days I only included one all-22 breakdown. On to the packer game. Go Bears!