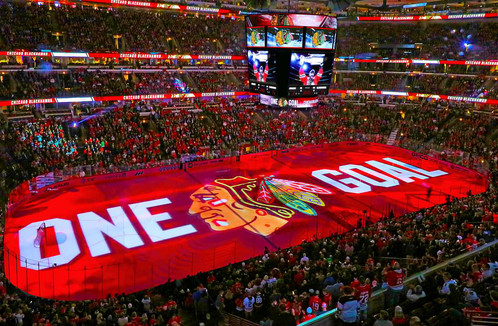 It’s not where the Blackhawks should be but it’s reality. Stan Bowman and the front office are deep into their offseason work instead of watching the Blackhawks in the conference finals. It sucks and I have watched an abundant amount of old ‘Hawks playoff highlights to get me through it. But there is promise, bountiful cap space, and pieces falling into place for the Blackhawks to get back to the postseason next year. Let’s take a look at the following developments on the roster and where they go from here.

Wedin is coming off his best pro season and will compete for a bottom six role for the Blackhawks. When you look at any team but especially the Blackhawks championship years, depth helped them win the Cup. You need speed and skill on your third and fourth lines because the top guys cannot do it all. Wedin joins the group of guys like David Kampf, Dylan Sikura, Brandon Perlini, John Hayden, Dominik Kahun, Drake Caggiula, and many others who will surface in the later months of summer competing for a spot on the roster. It’s a good problem to have multiple guys with NHL experience and success and players with something to prove. Another notable player who will be in camp is prospect Phillipp Kurashev who signed a three year entry-level deal in March. The 19 year-old totaled 65 points in 59 games in the QMJHL this season. He is currently playing for Switzerland in the IIHF World Championship and has tallied a goal and an assist in two games.

One player who will not be apart of the competition is Victor Edjsell. The once highly coveted prospect and at one time the center-piece of the Ryan Hartman deal to the Nashville Predators in February of 2018. The Blackhawks also received a first and fourth-round pick in the 2018 draft that turned into Nicolas Beaudin and Kurashev.

Edjsell put up solid numbers to start his tenure with the Rockford IceHogs. He had four game winning goals in the Calder Cup playoffs in 2018 and looked like a lock to make the roster out of camp this season. But he did not and his AHL campaign this season was disappointing, producing just 29 points in 61 contests. Now, Edjsell has decided to return to Sweden to the SHL. From the Athletic Chicago, the Blackhawks weren’t pleased with Ejdsell returning to Sweden. They were far from writing him off and still believed he could be an NHL player.  Now, the Blackhawks can offer him a qualifying offer to hold onto his rights.

Onto the other contract, Koekkoek is a low risk move. He did fine last season and had some bright spots. His experience in the system was a reason to bring him back along with the minimal cost. On the other hand, anyone can tell you bringing back the same players on a non-playoff team is not a recipe for success. I am not the only person writing this. The Blackhawks are stuck with Duncan Keith and Brent Seabrook, more-so Seabrook because of the larger cap hit and the decline in production. The advanced stats actually showed a very solid season from Keith and his ability to still be a top-four defensemen. Defense is the glowing need for the Blackhawks and Koekkoek does not fix that, but maybe he is a guy who can be inserted into the lineup on a regular basis and make an impact on the third pairing. It would be smart for Colliton to cut Seabrook’s minutes and maybe give him some games off. It’s something many are thinking and may be best for the 34 year-old. Overall, I am fine with the signing. He’s a 7th defensemen and a plan if injury strikes.