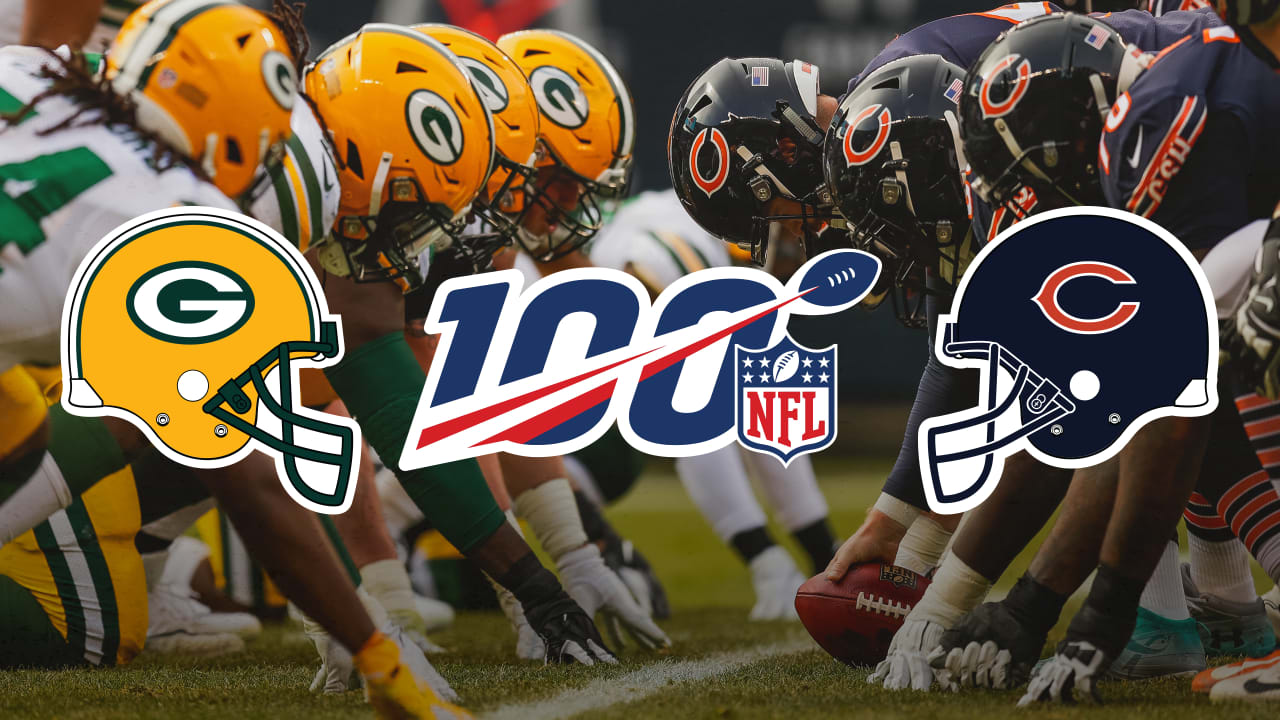 They’re both heritage franchises who were responsible for creating the NFL. They have the longest running rivalry in the history of the league and the most storied which makes this game the perfect choice to open both the league’s as well as the Bear’s 100th season of its existance at Soldier Field in Chicago.

In recent history the rivalry has lost some of it’s luster with it being so onesided in the Packers favor who not only have the better record the past 20 years, but have given the Bears some of their most memorable and embarrassing ass whoppings in team history. Way too many games that did not even resemble competitive football for the Bears versus the Packers. Much of them at Soldier Field who the Packers have made their Lambeau Field South.

With the hire of 2nd year Bears Head Coach Matt Nagy the Bears hope to usher in a new era of Bears football where the Bears dominate the won/loss record or at the very least even it up. They made a major move in that direction last year in Nagy’s first year as the teams head coach by splitting the season series and winning the division. Meanwhile, the Packers regressed and fired longtime Head Coach Mike McCarthy.

Now, the Packers find themselves in a similar position the Bears did just last season. The circumstances are a little different however. The Packers are not trying to develop a QB as they have Aaron Rodgers one of the best to ever play the position and a sure first ballot HOFer. However, they did hire a young offensive Head Coach in Matt LeFleur to run a more current offense to maximize Rodgers latter years and re-open a championship window.

Introduce one of the most focused and talented defenses in the league in the unit the Bears organization boasts, and LaFleur has a monumental task ahead of him in his debut game. Add on top of that the magnitude of having the entire nation watching you on National television in your biggest rivals stadium in a hostile environment trying to call plays that will succeed against what likely will be the best defense in the league. That’s even a more monumental task than Nagy faced in his debut in Green Bay’s 100th year, on national television, against a pretty solid front 7 and a formidable Defensive Coordinator (Mike Pettine) in one of the hardest home stadiums to win in legendary Lambeau Field.

Nagy almost pulled it off too, but number 12 did what he’s done his entire career and that’s breaking Bears fans hearts and the Bears players wills and pulled off another comeback win in the last minutes of the ball game. There is where LaFleur has the advantage Nagy did not and that’s a 35 year old vet who has won big games on the road and has beaten the Bears in Soldier field his entire career. Meanwhile, Nagy had a raw rookie in year one playing in game one of his offense.

As much as the offense looks to improve in the second season under Nagy it is the defense that is and should be the star of this game. As mentioned, this is the first game of LaFleur’s career.  It’s his offense and as we all know it’s not that easy implementing a new offense. Even with a Quarterback of Rodger’s pedigree it takes the rest of the 10 players on offense to play as one to succeed offensively.

Plus, the personnel is not what it once was when the Packers threw weapons like Jordy Nelson, Randall Cobb, James Jones, Greg Jennings and Donald Driver among others at ya. Aaron Rodgers is throwing to a very good Devonte Adams and a dangerous Aaron Jones out of the backfield but a whole lot of question marks elsewhere. There are some interesting talents but not a lot of quantifiable success from the Packers weaponary. The one guy with success on their roster, Tight End Jimmy Graham, is older and has not been all that dangerous in quite some time now.

Marques Valdes-Scantling is a nice size to speed athlete but has yet to lay down a large sample size of success in this league. Geronimo Allen was off to a good start until he got injured but who knows if he could have sustained it. These are not guys the likes of Kyle Fuller, Prince Amukamara, Eddie Jackson, Ha Ha Clinton-Dix, Danny Trevathan and Roquan Smith should have a lot of trouble covering.

The Packers do have a great Left Tackle and a good Right Tackle and their interior guys are capable. The big addition for the Packer Offensive Line group was former Bronco Billy Turner to stabilize the Right Guard spot. The rest of the unit is very solid and formidable. That should definitely help LaFleur out some. The other four are very good players starting with David Bakhtiari at Left Tackle, Lane Taylor at Left Guard, Corey Linsley at Center and Right Tackle Brian Bulaga. It should be an excellent matchup versus arguably the best front 7 in the league.

About that front 7, as I mentioned it is quite possibly the best in the entire NFL. While they are going up against a formidable offensive line with an even more formidable Quarterback, they should dominate them as they did both games last year. Minus the second half of last season’s opening game at Lambeau Field when ex Bears Defensive Coordinator Vic Fangio inexplicably chose to play prevent and call the dawgs off of a gimpy Rodgers.

With a front 7 of Khalil Mack, Akiem Hicks, Eddie Goldman, Bilal Nichols, Leonard Floyd, Danny Trevathan and Roquan Smith the expectation should be domination. Not only tonight but through all 16 games plus the post season.

Than they have depth that would be starters on a good portion of the league’s other teams with a beast like Defensive End Roy Robertson-Harris, Nose Tackle Nick Williams and Defensive End Abdullah Anderson.

Behind them at off-ball Linebacker the Bears have Nick Kwiatkoski who is a possible matchup weakness in some one on one coverage assignments but solid everywhere else. They also have the athletic Josh Woods who was added to the 53-man roster because of his ability to matchup on Tight Ends and Backs in coverage. The Bears kept a surprising 6 ILBs so they have plenty of coverage behind the starters should injury happen. Joel Iyegbuniwe and Kevin Pierre-Louis are primarily special teamers but have the speed and athleticism to contribute in Nickle as well as play stout in the box versus the run.

With new Defensive Coordinator Chuck Pagano at the helm expect an even more aggressive style of defense in the mold of the 2011 Ravens where Pagano coordinated that group to the top unit in the league and led in defensive DVOA. Imagine having this defense attacking on a more consistent basis. Something that should make any offense and in particular Quarterbacks nervous. That should lead to not only more sacks, something people focus too much on, but also force sack fumbles and forcing said nervous Quarterbacks throwing the ball into coverage thus keeping the takeaways coming. Forget about the regression talk.

On the back end much has been made of the losses of Safety Adrian Amos and to a lesser degree Bryce Callahan. However, I see Dix as an upgrade over Amos as he is more of a playmaker. In an off year he contributed 5 takeaways for the Packers and Washington last season.

Buster Skrine has gotten a lot of flack by the media who many classify as a bum but the Bears feel differently. Nagy was praising him last season and called him one of the best Nickle corners in the league. Now he’s a Bear. He will have to minimize his pass interference penalties as he can be a little grabby. Skrine should contribute a lot at the line of scrimnage as Pagano will likely have him attacking the front in both run and pass blitzes as Skrine is good at blitzing and tackling.

The other two starters are All Pros for a reason. In Kyle Fuller and Eddie Jackson the Bears not only have one of the best at each one’s position but one of the two smartest defensive backs in the league and great leaders. Prince Amukamara doesn’t get a lot of attention but he certainly had a Pro Bowl worthy season in 2018 and is as sticky as it comes. Now, he has added the interception to his arsenal as he admittedly said he only recently learned how to catch the ball under Former secondary coach Ed Donatel.

They also have some confidence in their reserves as Duke Shelly is another aggressive tackler and press corner the Bears are high on who may be the eventual Nickle Cornerback successor as early as next season. He can also play on the outside as well. The main Boundry backup will be second year Corner the very tall and rangy Kevin Tolliver who made the 53 man last season as an undrafted free agent. He’ll get plenty of snaps this season and looks to be the long term replacement for Amukamara.

This matchup tonight looks to be unknown offense versus unknown defense. In this case, Bears have the advantage as they will not change as drastically under Pagano as the Packers offense will under LaFleur. I think some of the blitzes Pagano dials up may be a surprise but just as the Bears have been studying LaFleur’s offense from last year in Tennessee the Packers have been studying Ravens tape from when Pagano Coordinated there. So, they both should have a general idea of how the other like to call a game based on situation. The big ex-factor is how they use their personnel. Who does what job when?

This is a classic Bears defense versus Packer offense tilt and that is where this game will be decided. Which unit dictates the action against the other. The offense for the Bears may steal the show, or maybe the Packers Defense takes a step in a surprising direction and is the story of this game, but it’s much more likely it comes down to Pagano versus LaFleur. Rodgers versus Trevathan. Adams versus Fuller. Bears front 7 versus the Packers protection and run blocking. In other words, the strengths of both teams.

Will it be a when an unstopable force meets and immovable object type of game, or will it be big bad bully (Bears defense) versus skinny overmatched nerd (Packers offense) getting their milk money taken from them. Bears fans certainly hope it’s the latter. My prediction? Not quite, but closer to the latter. Bears 27 Packers 13