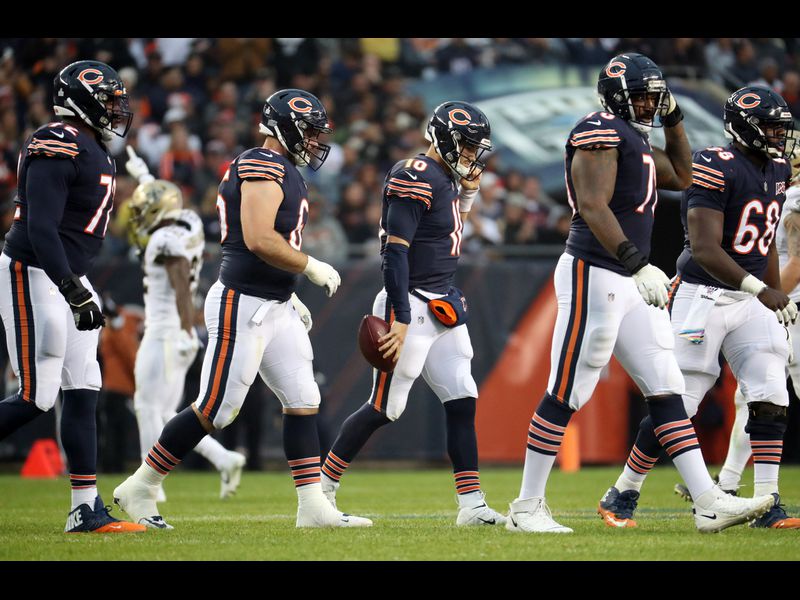 The Bears offense is at a standstill. Third-year quarterback Mitchell Trubisky has failed this season to execute the offense and get the ball to his playmakers. Outside of his three touchdown game in a win over the Washington Redskins close to a month ago, the former second overall pick has not convinced anyone he is the Bears franchise quarterback. He has had difficulty throwing the ball downfield, consistently missing open receivers, not making plays with his feet and most of all, he does not look comfortable right now in this offense.

Last season we saw some moments that convinced us Trubisky is going to the guy. His six touchdown game vs the Buccaneers was what you could call his coming out party. He completed over 73% of his passes and the Bears moved to 3-1 on the season. Everyone was drinking the Kool-aid and were ready to believe in Trubisky. As the season went on, Trubisky started to connect with his vast amount of weapons. There were plenty of mistakes along the way but it being his first year in a new offense was an excuse commonly used. Though the Bears found themselves in the playoffs and Trubisky found Allen Robinson on their final drive to set up the game winning field goal, which we know what happened there, the consensus on Trubisky was one of positivity in his first season under Nagy. There was a lot to be cleaned up in his game but there were positives moments to build off of heading into the offseason and fix in training camp.

Now that narrative has been thrown away. Trubisky has failed to perform close to any level he was at last season. He is not seeing the entire field and too many times is he locking onto one receiver, particularly Robinson. We cannot go into the mind of Trubisky but we are getting a pretty good understanding this season of what is going on up there: maybe his football IQ is lower than we thought. Opponents are adjusting to what Nagy and Trubisky are trying to accomplish and they are struggling to adjust. Most noticeably has been that teams have figured out Tarik Cohen. He is not the same player we saw last season and is having a hard time in the offense this season. His versatility is key to what the Bears are trying to do on offense and Nagy has to figure out how to get that going again.

The Bears were playing from behind yesterday so they had to sling the ball to even have a chance at a comeback. But the Bears failed to even get the run game going in the first half with Mike Davis or rookie David Montgomery. This has to be a major focal point of the offense moving forward. Montgomery should be getting 15-20 carries a game and also be used a weapon in the passing game out of the backfield. The Bears traded up for the Iowa State product and he needs to become a big part of what they do on offense.

Nagy also has to adjust his play calls to what Trubisky does well. QB designed runs, RPOs, quick throws, rollouts off play action and the occasional deep shot down the field. Trubisky is never going to be a great pocket passer. Nagy has to realize that and play to his strengths.

The game plan from now on should include what I mentioned above because there is plenty of tape that backs it up. One reason the Bears ranked toward the top of the league last year in third down conversions was because Trubisky picked up yards with his feet. He rushed for 421 yards and three touchdowns last season with just five attempts for 21 yards this season. It is one of many reasons why the offense has looked every worse week to week.

With the play calling needing an entire makeover, Trubisky has to start spreading the wealth around to his receivers. Trey Burton and Anthony Miller combined for 13 touchdowns last season. They have not come close to one this season. Both were big parts of the offense last season and builded a strong chemistry with Trubisky. Adam Shaheen is another who Trubisky has failed to get the ball to this season. That is one connection that should be a focal point because of Shaheen’s big frame.

Overall, Trubisky is failing to hit his receivers. He missed several throws Sunday on the lake front and others who were wide open down the field but failed to even recognize it.

The excuses have run dry. Patience is getting low or completely gone with Trubisky with fans. Also, quarterback has officially become a need for the Bears unless Trubisky makes a drastic change for the better in his play.

The Bears are 3-3. Playoffs are not lost yet but the offense must fix itself or the Bears will struggle mightily to even sniff the postseason.