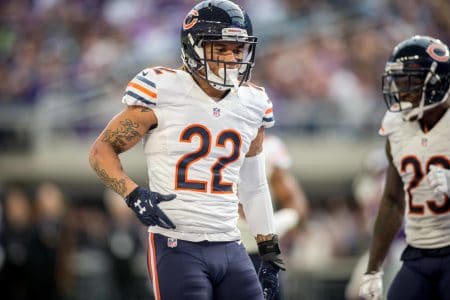 While all of you Bears fans are jumping up and down for joy at the Khalil Mack news, GM Ryan Pace is still at work on other matters. It was reported this morning by Chicago Tribune’s Brad Biggs that corner Cre’von LeBlanc has been waived by the team. LeBlanc (24) has played in 28 NFL games and started 10 of them.

To a number of Bears fans, it was surprising a bit. LeBlanc was a solid depth piece in the secondary and was their top player in passes defended in 2016, which really is not saying much considering what that team was, but still. He has a total of 13 passes defended, 52 tackles and one pick in his career, all with the Bears. With that being said, it is not the end of the world. While he was a solid depth piece, there are other options.

It appears that Kevin Toliver will be making the 53-man roster in LeBlanc’s place. Toliver had a good preseason and there had been speculation that he could potentially make the team. Toliver (22) is an undrafted rookie out of LSU who signed with the Bears this season. Clearly the team sees more potential in him as a backup behind Prince Amukamara and Bryce Callahan.

LeBlanc can easily land on his feet with a team in need of corner depth. He has shown enough talent to be an NFL cornerback, and it is not to say him getting waived was a huge knock on him, there just was not room to have him and Toliver on the team. Sometimes you have to make tough decisions, and there are more of those having to be made with this Bears roster. It is good when this is happening because it means the team has something it has not had in while…depth.